Collections of essays are usually organised around a particular theme. This book, which represents Canadian legal historians’ tribute to Professor Dick Risk, is, at first glance, something of an exception to that practice. The essays here cover subjects which range from the form of the criminal trial in the eighteenth century, to debates over the meaning of property in the nineteenth, to lawyer and poet Tom McInnes’ views on the law of aboriginal title in the early twentieth. In an important sense, however, there is a theme here, that of recognition of the scholarship and teaching of a pioneer in the field of Canadian legal history, a man who for many years has been the subject’s best-known voice and who was, for a time, its only serious practitioner.After graduating from the University of Toronto Law School (1959), receiving his call to the bar (1961), and attending Harvard Law School for graduate work (1962), Professor Risk joined the Faculty of Law at Toronto in 1962. His first few years as an academic saw him writing principally about real estate law, and in later years he became one of the country’s leading administrative law scholars. But it has always been legal history that most engaged and excited him. He taught his first course in the area in 1964, and has been teaching at least one a year ever since. His first major publication in the field was in 1973, and he has been publishing regularly ever since; Blaine Baker’s review of Professor Risk’s work in this volume charts the changes in interest and emphasis that have occurred during that time. On retirement he is continuing his work on the history of constitutional thought in Canada. We are fortunate that Professors Baker and Phillips have together conceived and carried through this volume in honour of their colleague. They are both very familiar with Professor Risk’s teaching and scholarship. Blaine Baker has been a long-time colleague and collaborator, and Jim Phillips describes himself as the University of Toronto Law School’s “other” legal historian. It is not surprising, therefore, that they should have come up with the idea of a festschrift for Dick Risk, and the Society thanks them both for that idea and for all the work they have done in putting this volume together. It is equally unsurprising that they were able to generate an enthusiastic response from the authors of the essays who make up the volume. That enthusiasm has resulted in fifteen original essays written by well-known legal scholars (and one practising lawyer), some of whom were students of Professor Risk. The essays are representative of work on the cutting edge of Canadian legal historical scholarship, and collectively make an excellent tribute to Professor Risk, one which the Society is delighted to be able to publish.

Reviews of Essays in the History of Canadian Law, Volume VIII: In Honour of R.C.B. Risk

Well-conceived and well-executed studies which should be of great interest....We are reminded of the interdisciplinary reach and continuing relevance of the best legal history.... The collection as a whole reflects the pluralism and the maturity of Canadian scholarship in the field. It stands as a splendid tribute to Risk and to the important role that he has played in the emergence of the 'new' Canadian legal history.  Barry Wright, Osgoode Hall Law Journal, Vol 39, 2001, p. 249.

G. Blaine Baker was a Professor Emeritus at McGill University before his untimely death in 2018. Prior to joining McGill in 1981 he was a Bigelow Fellow at the University of Chicago Law School. During his time at McGill he served as Associate Dean (Academic) from 1999 to 2001 and Associate Dean (Graduate Studies) from… Read more » 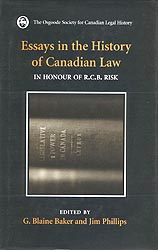