An introduction by the editors is followed by ten essays grouped into four main areas of study. The first is the legal system as a whole: essays in this section discuss the judicial failure of the Annapolis regime, present a collective biography of the province’s superior court judiciary to 1900, and examine the property rights of married women in the nineteenth century. The second section deals with criminal law. Its essays explore vagrancy laws in Halifax in the late nineteenth century, aspects of prisons and punishments before 1880, and female petty crime in Halifax between 1864 and 1890.The third, on family law, examines the issues of divorce from 1750 to 1890 and child custody from 1866 to 1910. Finally, two essays relate to law and the economy: one examines the Mines Arbitration Act of 1888; the other considers the question of private property and public resources in the context of the administrative control of water in Nova Scotia.

Reviews of Essays in the History of Canadian Law, Volume III: Nova Scotia

The essays are thus an important manifestation of the "new" legal history and open up many insights and avenues for both the Canadian legal historian and the comparativist. Most striking, however, is the coherent picture of the scope and role of the legal order in nineteenth century Nova Scotia that begins to change. L. Kinvin Wroth, American Review of Canadian Studies, vol 23, 1992

A major contribution to both regional and national historiography. Greg Marquis, Acadiensis, vol 21, 1992

The appearance of Volume III with its focus on the legal history of Nova Scotia represents an important new contribution, both because of its differing perspectives from eastern Canada and because the new volume aptly demonstrates the increasing scope of legal history which has occurred over the past decade in Canada.... As a series of essays on the regional legal history of Nova Scotia, this volume is exceptional; as a microcosm of the issues which need to be researched and analyzed - questions about law reform, about criminal law and punishment, about families and family life, and about law and the economy - this volume is a contribution to a more textured understanding of Canadian legal history as a whole. Mary Jane Mossman, Canadian Bar Review, vol 70, 1991 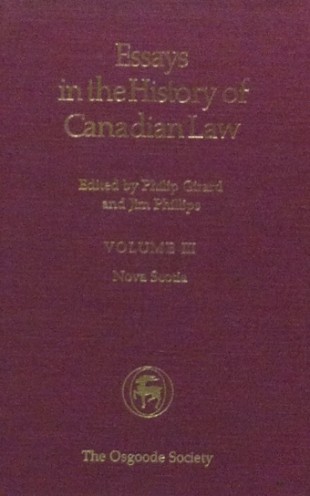 THE LEGAL SYSTEM: AN OVERVIEW

THE CRIMINAL LAW IN SOCIETY

5 Poverty, Unemployment, and the Administration of the
Criminal Law: Vagrancy Laws in Halifax, 1864-1890
JIM PHILLIPS 128
6 From Bridewell to Federal Penitentiary: Prisons and
Punishment in Nova Scotia before 1880
RAINER BAEHRE 163
7 ‘Raised in Rockhead. Died in the Poor House’: Female
Petty Criminals in Halifax, 1864-1890
B. JANE PRICE 200

WOMEN, THE FAMILY, AND THE LAW