Edited by David H. Flaherty.  Published with the University of Toronto Press, 1983.

This volume, containing nine essays, is the second of two designed to illustrate the wide possibilities for research and writing in Canadian legal history. Topics covered include: the role of the civil courts in Upper Canada; legal education; political corruption; nineteenth-century Canadian rape law; the Toronto Police Court; the Kamloops outlaws and commissions of assize in nineteenth-century British Columbia; private rights and public purposes in Ontario waterways; the origins of workers’ compensation in Ontario; and the evolution of Ontario courts. In combination, these two volumes of essays reflect the wide-ranging scope of legal history as an intellectual discipline and will encourage others to pursue important avenues of inquiry on all aspects of our legal past.

Reviews of Essays in the History of Canadian Law, Volume II

From almost every standpoint it is an exceptional accomplishment. The mature scholarship in this volume testifies again to the careful and insistent hand of editor Flaherty. Bradley Adams, Ontario History, Vol 20, 1982.

Every effort has been made to discuss legal problems in a manner that is both straightforward and comprehensible and to place these problems within their social context. Will Abbeah, Ontario Lawyers Weekly, December 1983. 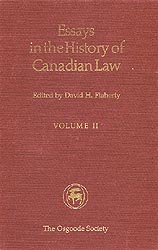