by David Williams. Published with the University of British Columbia Press, 1984. Out of Print.

Sir Lyman Duff is often described as Canada’s most distinguished jurist. His career encompassed forty years in high judicial office, the last eleven as Chief Justice of Canada. More than any other individual, he shaped the Supreme Court and its decisions during a period when it was struggling, often against formidable obstacles, to achieve the stature needed to fulfil its obligations as Canada’s highest judicial body. Although Mr. Williams’ work offers important insights into those difficult years in the court’s evolution, his focus is on Duff personally. Duff’s career as lawyer, jurist, frequent royal commissioner and adviser to Prime Ministers was unique to the man and his times. As his biographer, Mr. Williams has succeeded admirably in integrating that which is private and personal in his subject’s life with Duff’s larger political and judicial concerns.The result is a popular and entertaining account which will offer an introduction for many readers to the role played in the first half of this century by a great Canadian judge and to the Court which benefited so much from his intellectual eminence and outstanding leadership.

Reviews of Duff: A Life in the Law

Careful research, including examination of original sources, is evident. The literary style is easy and flowing which renders the reading a pleasure.  Hon M.M. McFarlane, The Advocate, (Vancouver Bar Association), Vol 43, 1985, p. 91.

David Ricardo Williams has written a biography of Chief Justice Duff that is a major contribution to the history of the development, not only of our judicial institutions, but of Canada as a nation .... The book is distinguished by wit and a clarity of style.  Thomas G Bastedo, Advocates’ Society Journal, Vol 14, 1985, p. 22.

David Ricardo Williams worked as a lawyer in British Columbia and was also a writer of both fiction and history. His first book was a history of his parish and after this he wrote books mostly concerned with legal and political figures. Williams was called to the B.C. bar in 1949 and subsequently moved to… Read more » 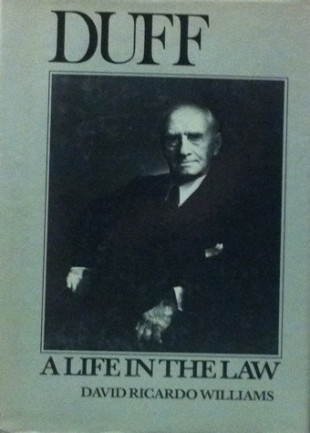