The Osgoode Society is thrilled to announce that Doodem and Council Fire: Anishinaabe Governance through Alliance, by Professor Heidi Bohaker, has been awarded the Canadian Historical Association’s Prize for Best Book in Political History Prize. Congratulations to Professor Bohaker.

Please join us in congratulating Heidi Bohaker on winning the 2020-21 Joseph Brant Award for her book, Doodem and Council Fire: Anishinaabe Governance Through Alliance, published by University of Toronto Press (2020).

While Canada’s constitution protects Indigenous treaty rights, Canadians know much less about the legal traditions of Indigenous nations and the ways in which these different traditions informed treaties made between Indigenous peoples and the Crown. Doodem and Council Fire: Anishinaabe Governance through Alliance, by Heidi Bohaker, Associate Professor of History, University of Toronto, is a ground-breaking exploration of one Indigenous legal tradition. In it, the author explains how a uniquely Anishinaabe category of kinship, the doodem, structured governance and law as practiced in formal councils (referred to metaphorically as fires) through the practice of alliance formation.  Such alliances created relationships of interdependence, which were renewed through the exchange of gifts in council. The records of early Canadian treaties, Bohaker argues, are to be found in the records of gifts exchanged to create these alliances between council fires; the Anishinaabe treated the French, and later the British, as if their governments were council fires also.  In return, colonial officials adhered to Indigenous law when they entered into treaties. Bohaker weaves together a voluminous amount of research from both Anishinaabe and European sources, including archival documents and material culture from institutions in Canada, Britain and France, to describe the continuities and changes in Anishinaabe governance and law until settler colonial law (the Indian Act) replaced traditional governance with elected band councils.

REVIEWS OF DOODEM AND COUNCIL FIRE:ANISHINAABE GOVERNANCE THROUGH ALLIANCE HAVE ALSO APPEARED IN: 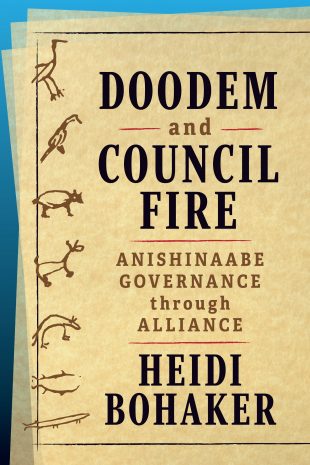