Canada was but one part of a large and complex empire, and this book is a reminder of that fact and a fascinating exploration of one important aspect of the legal history of the empire – the role of superior court judges.  Professor John Mclaren gives us a series of case studies of nineteenth century judges from across the empire, including of course the Canadian colonies,  who found themselves the centre of political controversy and were either suspended or removed from office. Frequently they landed in another colony despite their chequered pasts. The book also provides a very useful and informative survey of the process of judicial appointments and the developing rules on judicial independence within the empire.

John McLaren’s book … provides a rigorous and fascinating account of how the Colonial Office exercised its disciplinary authority over colonial judges. Existing scholarship has examined many of the cases McLaren analyzes, but as single instances or as part of the legal and political history of a particular colony. No one has employed the imperial lens to look at the evolution of judicial independence across the entire empire…. [T]his is as comprehensive an account of judicial discipline in the British Empire as we are ever likely to get…. Only McLaren`s empire-wide, comparative approach allows us to understand what would otherwise be a ‘wilderness of single instances.’ It also allows us to observe imperial political, legal and social networks in play, as McLaren follows judges, governors, and administrators from one colony to another during their peripatetic careers…. Stylistically the work is a pleasure to read. Philip Girard, Journal of Law and Society,  vol 39, 2012, p. 631

True understanding of the law must be based on an appreciation of the history and evolution of its institutions, practices and rules. This fundamental principle is illustrated by … Dewigged, Bothered and Bewildered. [It provides] a broad insight into the legal history of the colonies, …[and] the diversity of governance practices.… The most interesting demonstration of Dewigged is the role of judges as the agents of English law throughout the colonies.  Matthew Stubbs, Australian Bar Review, vol 35, 2011, p. 302

John McLaren is a Professor Emeritus of the University of Victoria Law School and one of Canada’s foremost legal historians. A prolific author, scholar, and educator, McLaren’s research focusses mostly on comparative colonial law, social justice, cultural diversity, religion, and public morality in the context of legal history. His interest is particularly in contested interpretations… Read more » 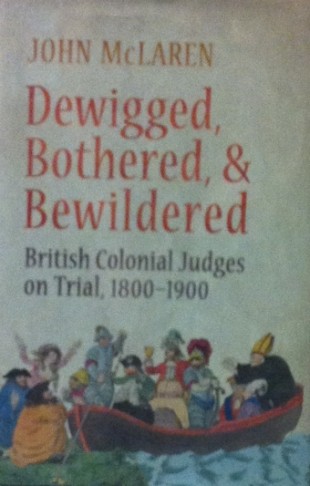