by Patrick Brode, Legal Counsel, City of Windsor. Published with the University of Toronto Press, 2002.

A pregnancy outside of marriage was a traumatic event in frontier Canada, one that had profound legal implications, not only for the mother, but also for the woman’s family, the alleged father, and for the entire community. Patrick Brode examines the history of the ‘heartbalm’ torts in nineteenth and early twentieth century Canada – breaches of duty leading to liability for damages for seduction, breach of promise of marriage, and criminal conversation. In probing analysis and engaging style, he demonstrates that these laws that were part of the inherited English system were a major feature of early Canadian jurisprudence. Brode argues that the heartbalm cases are a testament to how early Canadians tried to control sexuality and courtship, including even consensual activity among adults. By intermingling legal and social issues, and showing the often intriguing ways in which they interacted, Courted and Abandoned makes a significant contribution to legal history, women’s studies and cultural history.

Reviews of Courted And Abandoned: Seduction In Canadian Law

[T]he author looks at the common law origins of seduction torts in England and shows how and why these laws came across the sea to Canada and the United States. Brode does not just track the heartbalm torts, but delves into the cultural and social reasons why they either worked or did not work in the new world..... [T]he author uses a form of comparative storytelling to provide fascinating insights into the socio-legal development of this area of law in the various communities that settled early Canada. Dea Abramschmitt, American Journal of Legal History, vol 49, 2007

The author has penned a tour de force review of the heartbalm torts that were once the staple of a civil jury practice (and the foundation for salacious news reports). This penetrating study reveals much about the period's view of equality and of the role of the courts, of families and of women within the workplace, to name but a few examples. Gilles Renaud, Alberta Law Review, vol 42, 2005

A lively and revealing book for the general reader as much as a serious study of law and social history, and it belongs in both academic and public libraries. Louise Robertson, Canadian Law Library Review, vol 29, 2004

This is an interesting book that deserves critical attention and one that I hope will inspire much debate and further research. Lyndsay Campbell, Canadian Journal of Women and the Law, vol 15, 2003 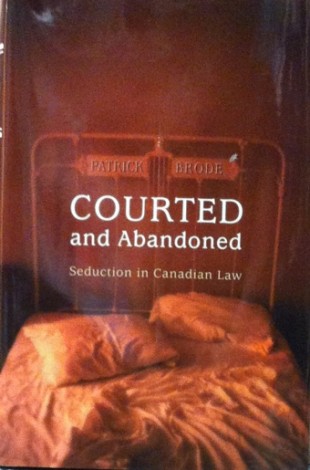