Colour-Coded has been translated into French and published in Quebec
as De La Couleur des Lois:

White supremacy had a tenacious hold on the historical roots of the Canadian legal system. Backhouse presents convincing case studies to illustrate how early 20th-century law played a dominant role in creating and preserving racial inequality. The cases focus on Aboriginal, Inuit, Chinese-Canadian and African-Canadian individuals, taking us from the criminal prosecution of traditional Aboriginal dance to the trial of members of the ‘Ku Klux Klan of Kanada!

Colour-Coded convincingly documents the case for the real-life consequences of racialization in Canada. If one of its goals was to obliterate the “stupefying innocence” of Canadians regarding racism in Canada, it has surely succeeded. Beyond that, it provides an invaluable teaching tool for law schools, the Bar and the Bench. Emily F. Carasco, Windsor Yearbook of Access to Justice, Vol 20, 2001, pp. 341-343

Law professor Constance Backhouse has a wonderfully direct way of telling stories and explaining convoluted case law, so I too will be direct. I loved Colour-Coded. Laura Robinson, Globe and Mail, February 12, 2000 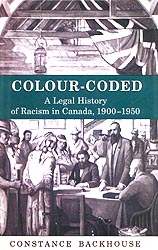 2 Race Definition Run Amuck: ‘Slaying the Dragon of Eskimo
Status’ in Re Eskimos, 1939 18