by Patrick Brode, Legal Counsel, City of Windsor. Published with the University of Toronto Press, 1997.

Casual Slaughters and Accidental Judgments: Canadian War Crimes Prosecutions, 1944-1948 is Patrick Brode’s third publication with The Ogoode Society and furthers his already considerable reputation for combining sound scholarship with readability. The prosecution after the Second World War of German and Japanese war criminals by the Canadian military was a new venture for Canadians, a break from Canada’s colonial past and an entry into world affairs. In one of the most sensational trials, SS General Kurt Meyer was prosecuted for the massacre of Canadian prisoners, Meyer’s reprieve, only days before he faced a firing squad, remains one of the most contentious post-war decisions. Throughout these trials, which included the trials of Germans accused of murdering Canadian airmen as well as of Japanese guards who allegedly tortured Canadian prisoners from Hong Kong, evolving standards of international law were applied by military tribunals. This fascinating and disturbing study demonstrates the efforts of military tribunals to apply the law of war against those who had acknowledged no law.

A well-researched account of little-known and even less remarked upon Canadian war crimes prosecutions at the close of WWII.  J.M. Jago, American Journal of Legal History, Vol 42, 1998, p. 464.

Brode’s study is well written and thoroughly researched. It deserves attention not only from Canadians interested in this part of their history, but also from international specialists, for whom it is a significant contribution to the literature of war crimes prosecutions.  William A. Schabas, University of Toronto Quarterly, Vol 68, 1998, p. 550. 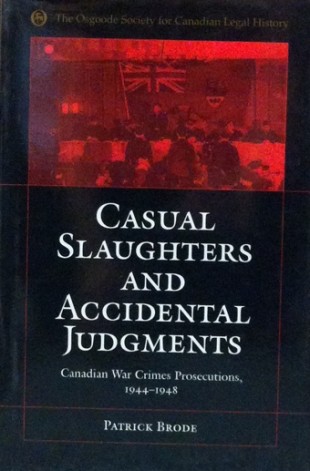