This second volume of the Canadian State Trials series focuses on the largest state security crisis in 19th century Canada: the rebellions of 1837-1838 and associated patriot invasions in Upper and Lower Canada. Historians have long debated the causes and implications of the rebellions, but until now have done remarkably little work on the legal aspects of the insurrections and their aftermath. Given that over 350 men were tried for treason or equivalent offences in connection with the rebellions, this volume is long overdue. The essays collected here break new ground in the existing historiography of the rebellions by presenting the first comprehensive examination of the legal dimensions of the crises. The essays, written by leading scholars in the field, place the trials and court martial proceedings fully in their political, social and comparative contexts.

Reviews of Canadian State Trials Volume II: Rebellion and Invasion in the Canadas, 1837-1839

For scholars and students interested in developing their expertise in the legal aspects of post-rebellion trials in the Canadas, Rebellion and Invasion is extremely valuable. ... There is a good coverage of the state trials throughout the Canadas, and the unifying themes that emerge tie the volume together nicely. Well-researched and well-written, this collection should fascinate all scholars interested in the pre-Confederation Canadas, particularly those working on the history of Canadian criminal law and procedure, legal and political theory, and early Canadian state formation.  R. Blake Brown, Canadian Historical Review, Vol 85, 2004, p. 122

The definitive factum...on the role of the law and legal institutions in times of revolt. Justice Gilles Renaud, Commonwealth Judicial Journal, Vol 15, 2003, p. 46. 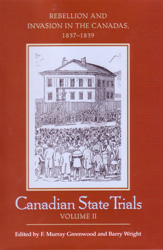