by William Kaplan. Published with the University of Toronto Press, 2009.

Ivan Rand had a long, varied and remarkable career. He is best known for his Supreme Court of Canada judgments in a series of cases emanating from Quebec in the 1950s and dealing with civil rights, cases which established limits on the government’s ability to persecute unpopular religious minorities. To labour lawyers he is also an icon for his invention of the ‘Rand formula’, one of the defining features of Canadian labour law. Rand was also a member of the United Nations special committee on Palestine in 1947, the founding Dean of the University of Western Ontario law school, and three times a royal commissioner, looking into the problems of the Canadian coal industry, the misconduct of Mr. Justice Leo A. Landreville, and labour disputes in Ontario. In this thoroughly researched and fast-paced book, William Kaplan traces Rand’s life and career in all its richness and controversy – Rand as lawyer, politician, judge, dean, and royal commissioner – through many seminal events of the twentieth century in Canada. The Rand that emerges is variously inspiring, frustrating to understand, sometimes contradictory, always complex.

Reviews of Canadian Maverick: The Life of Ivan C. Rand

Ivan Rand is a quintessential Canadian personality. And William Kaplan has delivered an equally representative biography. As such, Canadian Maverick is a splendid Canadian biography of a definitive Canadian figure. Allan Hutchinson, 'Your Typical Canadian Hero.' Globe and Mail, October 27, 2009.

Canadian Maverick does a masterful job of building the history around the man, and though the book demands an intrepid reader, the amount of detail provided is impressive.... Kaplan could only be true to Rand's legacy by writing a biography that is itself a "maverick" in the new and evolving genre of Canadian judicial biography. Jamie Cameron, Osgoode Hall Law Journal, vol 48, 2010, p. 369.

The fact remains that Rand's record of service to Canada, both as a judge and in the performance of other duties for governments, is ample evidence of his stature as a great Canadian. The author has done an excellent job of portraying him warts and all. His book ranks high among the many biographies of judges I have had the pleasure to read. Gerard La Forest, 'Justice Rand's Biography: Reflections and Recollections', Manitoba Law Journal, vol 34, 2010-2011, p. 6.

William Kaplan's biography about Ivan Rand (who served on the Supreme Court from 1943-1959) is the latest in a series of judicial biographies, and it provides many important insights about a judge who was at the forefront of what might be called the "independence movement" in Canadian constitutional law. Matthew Lewans, Alberta Law Review, vol 48, 2011, p. 796.

William Kaplan, currently in private practice in Toronto, was a professor at the University of Ottawa Law School from 1989 to 2001. He has been recognized for his work in arbitration and mediation. He is a recipient of Law Society Medal from the Law Society of Upper Canada (1999) for his contributions to the legal… Read more » 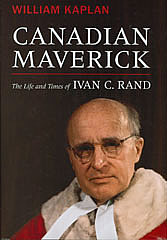 3 The Railway Counsel at Work and at Home 64

4 The Framework of Freedom 93