After coming of age during the Depression on the Prairies, being severely wounded in World War II, and after a career as a successful and prosperous corporate lawyer, Brian Dickson shocked his partners by accepting an appointment as a Manitoba trial judge in 1963.

Over the next twenty seven years, including seventeen at the Supreme Court of Canada, Dickson emerged as one of Canada’s greatest judges.

The Dickson years at the Supreme Court were a time of unprecedented constitutional controversy and legal change.

On his arrival, the Court was preoccupied with routine disputes; by his retirement as Chief Justice in 1990, the Court had become a major national institution and the Court’s decisions were the subject of intense public interest and concern.

As this biography of Chief Justice Dickson demonstrates, this striking transformation in the Canadian judicial system was matched by his own personal transformation.

Justice Robert Sharpe and Professor Kent Roach have written an engaging and accessible biography of one of Canada’s greatest legal figures.

This is the first serious attempt to profile this towering figure in law. It is unlikely to have many rivals in the near future. In marrying Dickson’s life experiences to his evolving rulings, the authors have produced a penetrating piece of work. ... Their exclusive access to a vast wealth of Dickson's private papers brought them a mother lode of information that reached well beyond Dickson himself and into the innermost workings of the court. ... Both as a biography and as an exposition of judging at the highest level, this is a vital piece of writing. Were it a legal judgment, it would constitute a landmark.  Kirk Makin, Globe and Mail, 3 January 2004, p. D8.

We come away...with a greater respect for the institution [of the Supreme Court] and for the heavy responsibility borne by judges.  Brian A. Crane, Ottawa Law Review, Vol 36, 2004, p. 362.

Kent Roach is a Professor of Law, Criminology, and Political Science at the University of Toronto, and the Prichard-Wilson Chair of Law and Public Policy. He was law clerk to Madame Justice Bertha Wilson of the Supreme Court of Canada (1988-1989) before joining the University of Toronto. He has published numerous articles on the current… Read more » 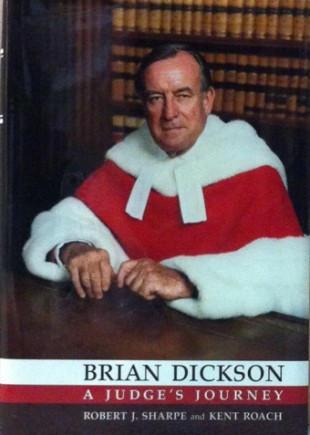 Part One: Introduction
1 A Judge’s Journey 3