This is the first comprehensive history of cross-border Canadian-American interactions in relation to fugitive criminals, escaped slaves, and refugees. Miller examines the complexity of those interactions, which involved formal legal regimes governed by treaties as well as informal and extra-legal phenomena such as abductions and ground-level ‘customary’ co-operation between low-level officials. All of this is set against the background of a developing international law and evolving ideas about extradition in other parts of the British empire.

‘Bradley Miller’s Borderline Crime … is a welcome addition to the growing body of scholarship on the history of borders and national sovereignty. Miller’s work … is especially welcome now, amid increasing global conflict over issues of migrants, refugees, fugitives and national borders…. Miller examines the border not only as a physical space, but also as a highly contested legal idea that created tension between the British imperial and Canadian governments, as much as between those of Canada and the United States…. Aside from being a carefully researched exploration of law at the U.S./Canadian border, Borderline Crime is also an entertaining read.’ Ruth Almy, Victorian Studies, Vol 60, 2018, pp. 508-509

‘Borderline Crime is a well-researched and thoughtful legal history of transnational policing, extradition, and the Canadian state….. [I]t successfully links legal doctrines to the practical environments that created or influenced them. … Miller does an admirable job of linking Canadian legal policy, with its focus on supranational justice, to the worldwide context.’ Benjamin Hoy, Pacific Historical Review, Vol 87, 2018, pp. 562-563.

REVIEWS OF BORDERLINE CRIME HAVE ALSO APPEARED IN THE FOLLOWING: 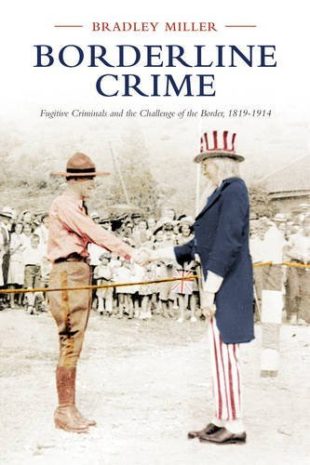