by William Kaplan. Published with the University of Toronto Press, 1996. Out of Print.

Bad Judgment is a quintessential fall-from-grace story about a man from humble beginnings who rose to the top of the legal profession in Canada, only to be removed from the bench because of his bad judgment, the intolerant attitudes of the élite bar and political necessity. But what did Leo Landreville really do? And why were some of the most famous lawyers and politicians in Canada out to end his judicial career?A successful Sudbury lawyer and businessman, Landreville was appointed a judge in 1956. He and his wife moved to Toronto to take up his job at Osgoode Hall. They lived at the newly built and very fashionable Benvenuto Place. Landreville enjoyed the good life. He had a place in Mexico, “Landrevilla” he called it, and he decorated his judicial chambers in Mexican motif. His elevated status was, however, short-lived for Landreville, while Mayor, had accepted a stock option from Northern Ontario Natural Gas around the time that NONG, as the company was known, obtained Sudbury’s natural gas rights. Soon after, Landreville exercised the option and pocketed $117,000, without having laid out a cent.These dealings eventually became known, and destroyed the political careers of a number of cabinet ministers at Queen’s Park. The President of NONG went to jail, and Landreville himself came under attack. The Law Society of Upper Canada investigated him and found his conduct wanting. So too did a retired judge of the Supreme Court of Canada, Ivan Rand, who while finding that Landreville did nothing wrong as a judge, concluded that he was a “hedonist” and should be removed. Eventually, the government took action against Landreville in Parliament, but the diminutive judge resigned rather than face the disgrace of being removed.

Reviews of Bad Judgment: The Case of Mr. Justice Leo A. Landreville

Colourful and meticulously researched account... A glimpse of politics, of lies and broken promises involving some of the leading political and legal figures of the time.  Frank Jones, The Toronto Star, August 17, 1996, p. J15.

There is a good story here, which Kaplan has researched thoroughly and told well. In the process he provides a useful contribution to ... political and economic history ... and a scholarly account of the constitutional status of judges. Kaplan's book is also a good read.  Jim Phillips, Canadian Historical Review, vol 78, 1997, p. 242.

William Kaplan, currently in private practice in Toronto, was a professor at the University of Ottawa Law School from 1989 to 2001. He has been recognized for his work in arbitration and mediation. He is a recipient of Law Society Medal from the Law Society of Upper Canada (1999) for his contributions to the legal… Read more » 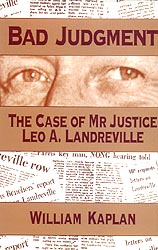