by Frederick Vaughan, formerly of the Political Science Department, University of Guelph. Published with the University of Toronto Press, 2004.

In 1963 Prime Minister John Diefenbaker elevated Chief Justice Hall of Saskatchewan to the Supreme Court of Canada. This judicial biography focuses on Hall’s career as defence lawyer, and civil litigator, his position as a civil libertarian judge and advocate of the rights of minority groups, and his work on a series of Royal Commissions, most significantly the Royal Commission on Health Services.

Always an individualist and possessed of a probing and disciplined mind, Hall made his own unique contribution to the judicial history of Saskatchewan and Canada.

Reviews of Aggressive in Pursuit: The Life of Justice Emmett Hall

This latest addition to a catalogue of books of the Osgoode Society is a treat, not a rare one in light of the on-going excellence of the collection, but a delightful addition to one’s library in general, and will prove of great benefit to any advocate or jurist. After all, who might not profit from gaining an understanding of the most effective way of framing an argument to convince a nation of the benefits of universal medicare.  Gilles Renaud, Advocate, Vol 64, 2006, p. 429.

In the 1960s, when few Canadians other than those in the legal profession paid attention to judges on the Supreme Court, Justice Emmett Hall became a household name.... Canadians probably best knew Hall as the chair of the Health Services Commission that recommended the establishment of a national universal health care scheme.... Vaughan has written a compelling and scholarly study of one of the most important Canadian jurists of the twentieth century.  Eric Adams, Social History-Histoire Sociale, Vol 39, 2006, p. 323.

The strength of Vaughan’s approach is that it gives the reader a clear description and assessment of Hall’s contribution, especially as a jurist.... Vaughan provides the reader with fascinating details about the interplay of personalities among jurists on the Saskatchewan Court of Appeal and the Supreme Court of Canada.  Jim Miller, Queen’s Law Journal, Vol 31, 2005, p. 419. 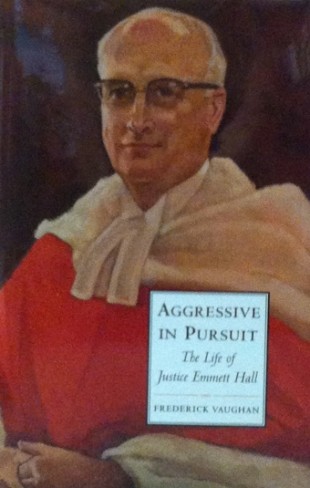