by Patrick Boyer. Published with the University of Toronto Press, 1994.

Patrick Boyer’s portrait of James Chalmers McRuer (1890-1985) reveals the complexities of one of Canada’s outstanding jurists, and shows the character and personal dilemmas of the man who was arguably Canada’s greatest law reformer. McRuer’s career of more than fifty years included periods as a crusading Crown prosecutor, service on the Archambault Royal Commission on Penal Reform from 1936 to 1938, judge on the Ontario Court of Appeal in 1944, chief justice of the Ontario High Court from 1945 to 1964, head of the Royal Commission Inquiry into Civil Rights from 1964 to 1971, and leader of the Ontario Law Reform Commission from 1964 to 1977. The commission, the first such body in the British Commonwealth, was created largely through McRuer’s relentless efforts. He was its moving spirit for more than a decade, and through countless law reforms – from married women’s property rights, to new home warranties – came his most important legacy to future generations. The driving spirit behind McRuer was his passion for justice. He believed the justice system should serve the oppressed, regardless of their ability to pay. McRuer saw a pressing need to adapt the law so that it would better serve all people in the changed conditions of the twentieth century. He possessed a sharp sensitivity to the often hidden injustices existing in an advanced industrial society and a bureaucratic state.In discerning the impulses that fuelled McRuer’s career, Boyer shows the anomalies within the shy public man who was committed to penal reform but was known as ‘Hanging Jim’ for his readiness to send men to the gallows. A curious personal insensitivity was combined with legendary kindness. McRuer, in his legal, political, judicial, governmental and educational roles, articulated the philosophy of classic liberalism, of individualism, and of a deep religious conviction – values and works which, as a result of his tireless efforts, remain today as part of his legacy, solidly embedded in contemporary law.

Reviews of A Passion for Justice: The Legacy of James Chalmers McRuer

Patrick Boyer has now revealed that biography can enliven the study of law. Lawyers and law students owe a great debt of gratitude to Boyer for painstakingly producing this outstanding portrait of a great jurist and law reformer.  Gordon Bale, Queen's Law Journal, vol 21, 1995, p. 273.

[Boyer reveals] what turns someone whom the Financial Post once described as ‘a decent competent, quiet Toronto lawyer who made an excellent Sunday school teacher,’ into a jurist of uncommon distinction with a lasting influence on the legal system of his country.  Gregory Tardi, Canadian Bar Review/La revue de barreau, vol 74, 1995, p. 388.

J. Patrick Boyer is the president of Blue Butterfly Books, an independent Canadian fiction and non-fiction publisher. He has written numerous books on law and public policy, and has also served on the national council of The Writers’ Union of Canada. Mr. Boyer has worked as an adjunct professor in the Department of Political Science… Read more » 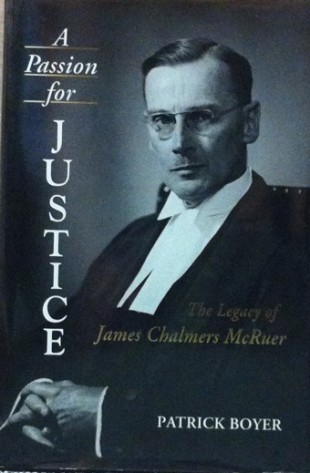