by Christopher Moore, published with the University of Toronto Press. 2014. 40, student price $20.

Before 1850 the Court of Appeal for Ontario was the Governor’s Executive Council. In 1850 the Court of Error and Appeal for Canada West met for the first time, the first appeal court for what is now Ontario that was both independent of the Executive Council and staffed only by professional judges. Christopher Moore’s study of the modern court’s history begins with these early courts, and provides an account of more than 200 years of the court’s institutional history. It charts the various and at times complex reorganisations, and identifies landmark events, such as the creation of the modern court in 1876 and the opening up of criminal appeals in the late nineteenth century. This is also partly a biographical history, identifying dominant figures, especially Chief Justices, in the court’s development. Along the way the book looks at the court’s workload, its internal administration, relations with the bar, and connections to the politics of the province.

REVIEWS HAVE APPEARED IN THE FOLLOWING:

Reviews of The Court of Appeal for Ontario: Defining the Right of Appeal, 1792-2013

Moore's book documents the introduction of the Criminal Code of Canada in 1892, and the Court of Appeals expanded jurisdiction.... Chapters in Moore's book focus on groupings of various Chief Justices who presided over the Court.... The History of the Ontario Court of Appeal provides valuable insight not only into the evolution of that court, but the evolution of the judicial system in Upper Canada and Ontario. Greg Mulligan Ontario Superior Court Judges' Association, Association News, November 2104

Moore … situates the court in the context of idiosyncratic reformers, changes in legal thought and practice, the rise of industrial Ontario, and shifting popular attitudes towards the legal profession… Moore’s effort is worthy of unabashed praise. R. Blake Brown, Canadian Historical Review, Vol 96, 2015. 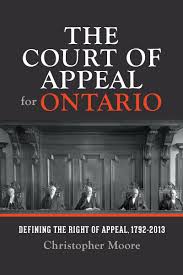 BIOGRAPHICAL DICTIONARY OF THE JUDGES OF APPEAL   211