By Jim Phillips, Philip Girard, and R. Blake Brown, published by the University of Toronto Press.

Jim Phillips is Professor of Law and History at the University of Toronto. Philip Girard is Professor of Law and History at Osgoode Hall Law School/ York University. Blake Brown is Professor of History at St Mary’s University, Halifax. This is the second volume of what will be a three-volume history of law in what is now Canada. The main theme of A History of Law in Canada Volume II is encapsulated in its sub-title:  Law for the New Dominion. As a new state on the global stage, Canada tried to use law to weld into one nation several disparate settler colonies established on Indigenous lands. But unity was elusive:  Canada had to recognize Quebec civil law and tried to override or replace Indigenous law even as it faced challenges to its own authority, from the Northwest Rebellion to the claims of restive provincial premiers.  The volume deals with all aspects of Canadian law and legal institutions, with chapters on the constitution, courts and judges, sources of law (common law, civil law, Indigenous law and statutes), the legal profession, Canadian law and Indigenous peoples (3 chapters), criminal law, law and the economy, labour law, property law, the law affecting women’s status, and civil rights and minorities.

R. Blake Brown is a Professor in the Department of History at Saint Mary’s University, and an Adjunct Professor at the Schulich School of Law. Professor Brown researches and teaches in the areas of modern Canadian history, legal history and the history of Atlantic Canada. Professor Brown has been the Fulbright Visiting Research Chair and… Read more » 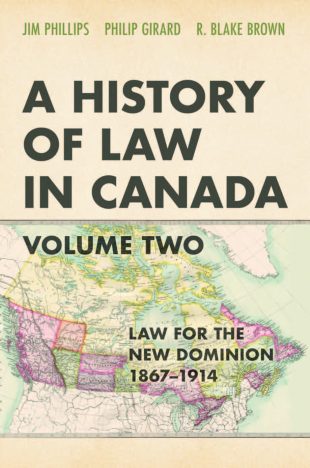